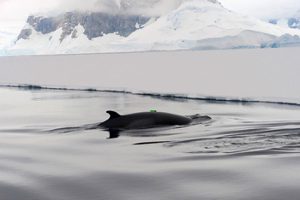 The vivid footage — which aims to improve researchers’ understanding of how the little-known Antarctic minke whales live — shows the mammals swimming beneath icy seas and coming up for air.

“It’s unique in that we’ve never been able to measure this kind of an environmental feature from the animal’s perspective,” Ari Friedlaender, an ecologist at the University of California Santa Cruz who headed the mission, said in a statement.

With footage like this, which Friedlaender and his team are still watching, the researchers want to see how sea ice concentrations impact the whale’s ability to feed on small fish and krill. This is significant because in recent years Antarctic sea ice has plummeted — and climate change could be the reason why.

Critically, it’s not just Antarctic sea ice that’s changing. Due to warmer ocean waters, the ends of the continent’s massive ice sheets (called ice shelves) that float over the ocean have started to destabilize. If, and when, these collapse, Antarctic ice will flow unimpeded into the oceans, like a plug pulled from a drain. This could raise sea levels by many feet.

In West Antarctica alone, ice flowing from destabilized ice shelves has doubled in the last 30 years.